Come to my cozy home studio with views on The Hague’s skyline to record your songs! 10BEL MUSIC offers you multitrack recordings with possibilities ranging from 1 voice/instrument to drums or small bands with multiple microphones. Filming your studio session with a professional crew is also possible.

You already have a multitrack recording and now your material needs professional mixing? 10BEL MUSIC is at your service!

You already have a piece of nice music and your track needs a unique & professional bass guitar track? You are at the best place!

You have a song or a melody but you don’t know how to arrange it for a band or make a whole composition out of it? Or you only need additional string/brass arrangements on your track? Get in touch, we’ll discuss the details!

If you need music/sound effects for your game, or movie with 10BEL MUSIC you can set the creative process in motion.

Have you ever thought of music as a language? When you speak it well you can express feelings, thoughts and have ‘conversations’ with other musicians. If you live in The Hague and area, get in touch with me for music lessons in music theory, production, bass guitar and piano. 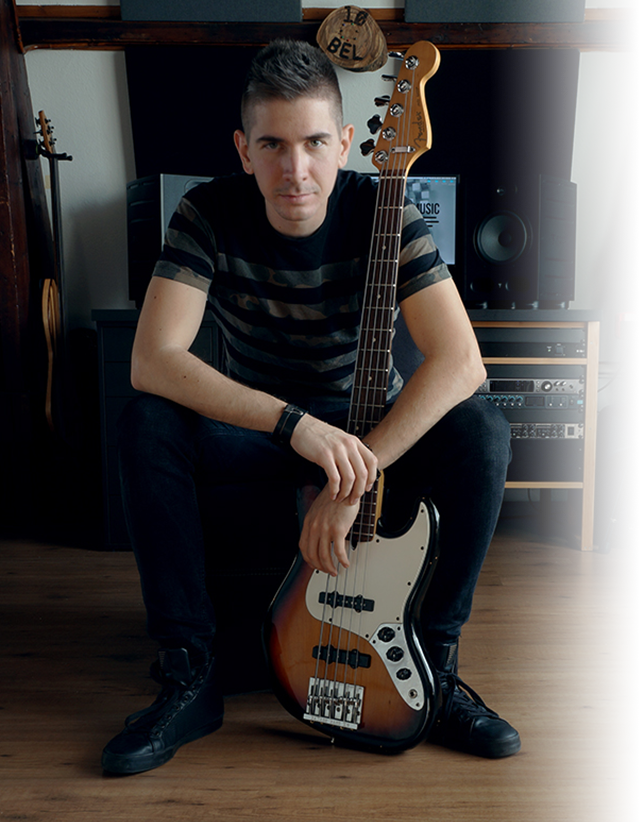 10BEL MUSIC = Dávid Szedlár
I’m a bass player, producer and songwriter based in The Hague, the Netherlands.

Music education & studies
I started my music education at the age of 7 with the piano as my main instrument. I studied at several music institutions in Budapest, Hungary, such as the Bartók Béla Conservatory, the Szent István Király Conservatory, the Kőbánya Music Studio and I graduated from Codarts University in Rotterdam as a bass player and creative producer in 2017.

Me as a bass player
In the Hungarian music scene I was a member of popular groups like Unisex, Grover Washington Jr. Tribute Band, UP! and Peet Project. As for international successes, a few milestones are performing at the Seabreeze Jazz Festival in Panama City, Florida and the Catalina Jazz Trax in LA. Currently, I’m playing with Dutch singer-songwriters Lilith Merlot, Marvin Timothy, Sára Hélène, Loren Nine, and the bands ROOKS and The 45.

Me as a producer and songwriter
As for my career as a producer, the very beginnings are connected to my high school years at the sound culture faculty of the Szent István Király Conservatory. I worked for the Hungarian Radio on Music Academy concert recordings and wrote ad music for Paradigma, which were played on commercial radios throughout Hungary. I continued my education as a producer at Codarts where besides my major in bass guitar, I completed a minor in creative producing. I have written and produced film music for Lonely Film, game music for Amaze Escape Events, Escape Room - ss Rotterdam, songs for Hungarian singer-songwriter Boggie and Dutch-Hungarian singer-songwriter Sára Hélène among others.

Me as a teacher
I am also passionate about passing on my knowledge. My main focus in teaching is not only to hand out technical excercises but to help students understand the language of music. I have experience through teaching privately and in music institutions (e.g. Music Soul House Zoetermeer, SKVR Rotterdam).

The decibel (dB) is a logarithmic unit used to express the ratio of two values of a physical quantity, often power or intensity. Today, the unit is used for a wide variety of measurements in science and engineering, most prominently in acoustics, electronics, and control theory.